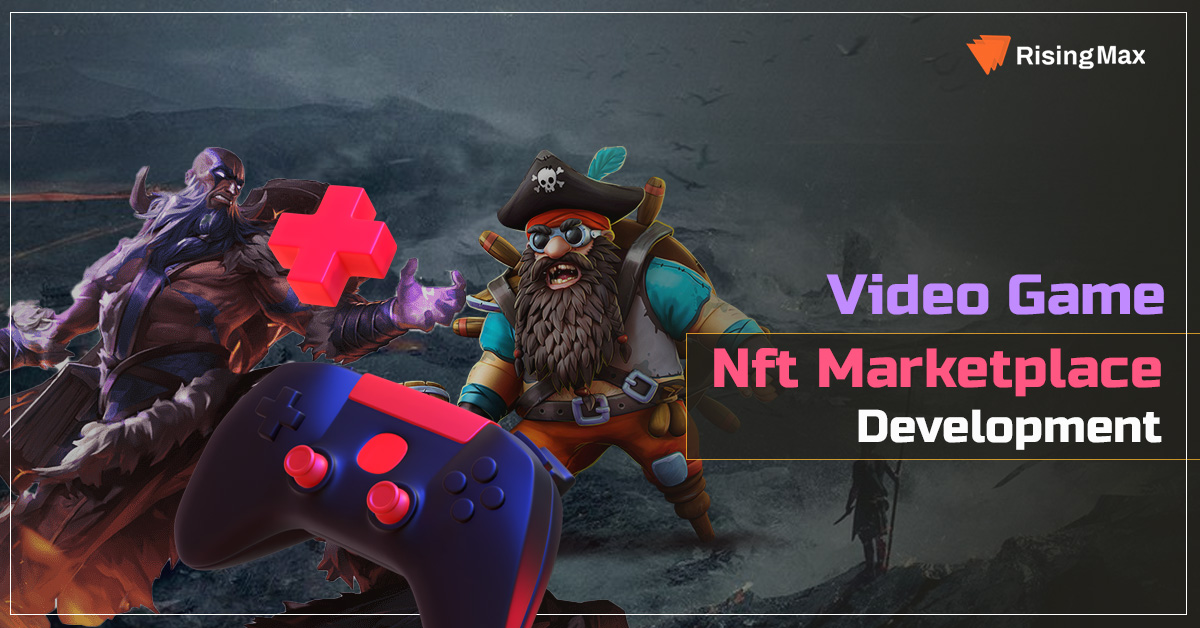 The NFT-based gaming industry is making a whole new world for game lovers. Play-to-earn option from the platform has already provided a perfect way to generate revenue for entrepreneurs. They are making millions, and the NFT gaming companies are also making a huge profit.

The video game NFT marketplace has given a great vision of the gaming platform that the gaming industry has never seen before.

None of the game lovers has ever thought they could earn money by playing games, and that too in millions. But the NFT-based gaming platform has made this possible.

Here Are The Number of Users on The NFT Gaming Platform To know How The Technology is Attracting Game Lovers:

Stats are according to Statista

According to industry experts, the number of users is going to increase by a million within 4-5 years. The blockchain industry has already shown its potential with the success of cryptocurrencies.

The NFT gaming platform on the blockchain network also has a high potential to be successful in the coming years.

If you are here because you were planning to make a start in the blockchain industry then my friend you are at the right destination.

RisingMax INC. is the leading company in the US that is into NFT game development for 6+ years. We have already delivered 5 projects of NFT-based games and working on multiple projects based on NFT.

Whether it is the US, UK, or the global marketplace RisingMax INC is the renowned name for the blockchain and NFT marketplace development. We are providing a lot more services in the sector of technology.

Today we are going to discuss the NFT game development. Give a brief read for acquiring a good knowledge that how you can generate revenue from the NFT gaming platform.

The new players are joining the NFT gaming marketplace more drastically; as per one of the sources, the gaming industry has experienced more than 400 million new users on the platform, and the only reason is the option of a play-to-earn platform.

With the launch of the NFT, the gaming companies came forward to enhance the marketplace and provide advanced platforms to the users. The video game NFT marketplace development companies have constantly supported the field.

In today's blog, we will see the advanced technology

NFTs are producing news for their capacity to open up modern conceivable outcomes in an assortment of ordinary applications.

The way NFTs are revolutionizing the gaming sector is making it a great place for game lovers and the industry. The gaming industry is one of the world's biggest commercial divisions.

The worldwide gaming sector is anticipated to reach $545.98 billion by 2028. The Non Fungible Token marketplace can expand by more than 150% in the upcoming 4-5 years; the NFT gaming platform development company

NFT-based games have the potential to be a game-changing venture by presenting the concept of "play to earn," which increases the scope and utilization of computerized recreations and on-field sports.

NFTs, as a one-of-a-kind representation of in-game resources, pick up esteem with time and can be sold for a benefit a while later.

An advanced diversion can give more practical gameplay encounters to its customers by supporting the stamping, obtaining, and exchanging of in-game collectibles within the shape of NFTs.

On decentralized trades, clients can collect and offer Gaming NFTs, get prizes, and cash out their tokens.

Let's take a closer look at the concept of Gaming NFTs. This article will also talk about the NFT Gaming NFT Commercial center, an exchange market for gaming NFTs.

The joining of an NFT Commercial center into an advanced game can deliver gamers a veritable gaming encounter by permitting them to monetize their in-game assets.

What is NFT in Gaming?

The NFT is providing immense benefits to entrepreneurs. The entrepreneurs have made NFT gaming the major source of income, and many investors joined the marketplace to invest in the most profitable business platform. Unicorn companies like NBA and NIKE have made the first move by launching their version on the NFT and Metaverse platforms.

The collectible items on the platform are worth a million, and people are joining to invest and exchange. The NFT gaming companies ensure a true sense of feeling while playing the game.

To provide the true sense, the game development companies are making the gaming platform with Metaverse. The combination of Metaverse and NFT made an entirely new world for gamers.

The metaverse platform development is merging the metaverse virtual world with the NFT marketplace. The combination of both technologies is making the gaming world more magnificent and generating revenue for game lovers.

Impact of The NFT On Video Games

Where the traditional game was just about playing and winning the digital collectible with zero cost, the NFT gaming platform is providing collectibles that have real money value in the marketplace of gaming.

Video games NFT marketplace is impacting the economy of the game users as well as the gaming companies who are providing the NFT-based games.

It is having a continuous rise in the market the youth are loving and joining the gaming platform as a major source of earning.

One out of ten youth in the US is available on the platform for generating a large amount on the NFT gaming platform.

NFT platforms are getting brilliant recognition in the marketplace of the game, and the blockchain platform on which it runs makes the platform safer, error-free, and without the involvement of any third party.

Play-To-Earn Model On The NFT

Blockchain technology is making the NFT platform conceivable for gamers to gain genuine rewards for playing without compromising their characters or bank accounts— standard recreations will require players to put through their cards to form buys.

At the same time, players can, as it were, take part by interfacing their crypto wallets to the in-game setup; authorization and exchange endorsement rests within the hands of the gamers. Most vitally, play-to-earn is encouraged by the utilization of smart contracts.

Points of reference can be modified to a smart contract such that when a player comes to a specific accomplishment, the contract starts a compensation exchange straight to the player's wallet.

No third-party associations are required, and the whole handle postures no peril to either player or diversion.

The gameplay is represented by these smart contracts, programs, and codes, and there can be no allegation of control from the developers, except if a bug is identified within the code.

Why Is NFT Gaming Better Than Traditional Games?

We all must have played video games from our childhood and also have earned a lot of collectibles after achieving a particular task on the gaming platform.

This is in the traditional gaming platform. Let's get it clearer by taking an example of the game.

Most of us are very familiar with the name PUBG or Free Fire; multiple players join a single platform and have to complete a particular task to earn a reward. Multiple players get the rewards by performing the task on the platform.

The collectibles on the platform are just for use in the game but have no value in the real-world or digital world. However, they are unique but available with multiple other players too. And the complete possession of the digital collectible is with the gaming company.

Video game NFT marketplace development companies came forward with such an innovation where the users can earn by playing not just by the play-to-earn system but also by exchanging the digital collectibles on the NFT marketplace.

The NFT provides 100% unique digital collectibles with zero possession. The NFTs are completely decentralized items, and nobody can have possession of the item except the one who buys it.

It helps to improve the gaming business more when the users join the platform and exchange their earned NFT constantly or after holding.

The NFT has opened the magical way to earn a good amount of money by either play-to-earn or by staking the NFTs in the marketplace either direct or by creating an auction.

The owners of the gaming platform invest a large amount in the gaming platform, so it is very obvious that they will need a great return on investment. Here let's see how the video game NFT marketplace is a business full of profit.

conceivable video game NFT marketplace development can be a great idea for generating a major source of income.

Features Of The NFT Gaming Platform

Most of us know that NFT gaming stages have cleared the way for the thought of the "Play-to-Earn" demonstrated within the virtual universe.

Players get elite rewards for completing any assignments accessible on NFT Gaming stages, and they are permitted to monetize their gaming resources on any commercial center stage.

The drift of NFT Recreations has been shaking the technology with its uniqueness and revenue-generating openings. Separated from giving a brilliant gaming encounter, these stages offer assistance to players to make a few additional bucks in their recreation time without any exertion.

And, of course, players consider it a perfect stage to form mega-profits inside a brief period. NFT Recreations are here to remain for a long time and have numerous shocks in stock for gaming partners over the globe.

What Kind Of Gaming Platforms We Can Provide

Axie game is one of the most known gaming platforms built on the Ethereum blockchain marketplace. The platform provides the facility of both playing and earning with their game.

The popularity of CryptoKitties is well known to those who have even a little bit of interest in the NFT industry. The crypto kitties game is becoming one of the favorites for game lovers.

Gods Unchained is a free-to-play diversion planned to imbue components of NFT into a recognizable card-exchanging gaming class. Players collect cards by acquiring them from other players or winning PVP matchups where the quality of cards and the gaming expertise of players frequently decide the victor. Outstandingly, more accentuation is being set on aptitudes and technique.

Who Can Help You In Building The NFT-Based Gaming Platform

NFT game development company will be the best choice for getting a perfect application to generate revenue. There are multiple other ways, too, through which one can get the work done.

One of the ways is hiring your own in-house team where each of the things will be your own, from developers to designers, but it has some loopholes. Before getting the application launched, building an in-house team can be really tough because you have to be attentive to the developing end as well as to the marketing of the application as well. This will be a kind of compromise with the million dollars investment.

The second option is hiring freelancers for the project. None of your well-wishers will ever suggest you go with this option, as with the freelancers, there is always a question of reliability and receiving the project on time.

The third option is hiring a Web3 game development company to build the platform so you can properly focus on building the marketing strategy for the application instead of diverting your focus to the in-house team.

We have 150+ core blockchain developers and NFT developers. We also provide free consultations to the startups and continuous maintenance to the projects we deliver.