Play To Earn Vs Play To Own Which Is Better 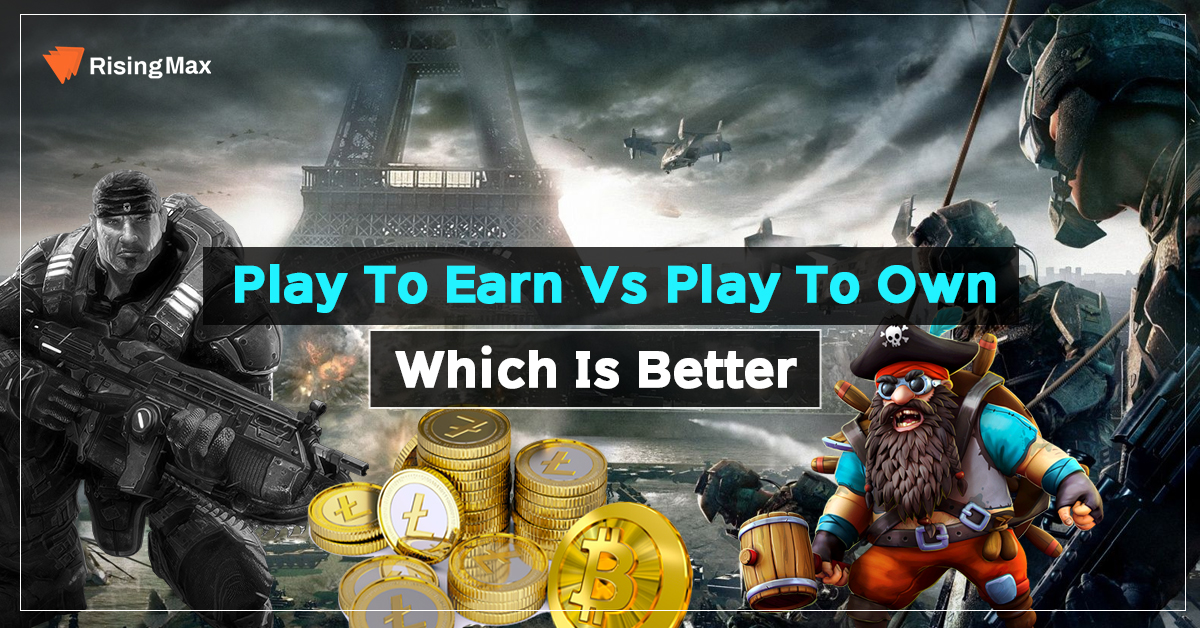 The blockchain platform has provided enough platforms to technology lovers to generate a good amount of revenue in various ways. The potential of the blockchain is not just limited to the crypto coins but also spreading like a fire in the other business sectors.

Gaming platforms are always in demand and people are crazy about them. The blockchain gave a perfect center for the game lover where they can not only play and enjoy the game but can make money by playing games on the platform.

The play-to-earn is attracting game lovers to make millions from the platform and setting up a new trend in gaming. After the great response to the Play-to-Earn platform, another option is rising up in the marketplace, which is “Play-to-Own.”

RisingMax Inc. is the leading web3 game development company in the US with more than 150+ core gaming platform developers, and we have already delivered multiple projects for Play to Earn gaming platforms. Jump directly to our inbox to know about the complete future of gaming.

While compared to traditional games, the game user has to invest their money to get the game, and in return, the users receive nothing except the enjoyment of playing.

Traditional games are the one-way profit section; slowly and gradually, the game lovers are expecting new things from the gaming platform, so they are moving toward the play-to-earn gaming platforms.

The play-to-earn games award the game user with cryptos for playing on their platform. The last few years have changed the scenario of the gaming platform.

Play-to-earn gaming platforms are making the gaming world a better marketplace to provide profit for both gaming companies as well as users.

It is becoming the mainstream platform for investors and game lovers.

The reward on the gaming platform excites the users as well as the gaming company as they get charges from the user to convert the digital money.

In the play-to-own games, the owner of the game has complete possession of the asset available in their account.

Play To Own Vs  Play To Earn Which Is Better?

Well, this is the question that matters to any game user or the owner who wants to build a gaming platform. The marketplace is huge for the gaming sector but getting the right platform for the revenue is the only thing that matters to you if you are a business person or investor.

Here let’s see what the difference between the P2E and P2O is.

The Play-to-Own platform is similar to the free-to-play platform. Free-to-play platforms do not charge the users for playing the game at the initial stage. The users can play free of cost in the beginning, but later on, the user needs to buy the customized object.

In the play-to-own gaming platform, the user plays the game and earns the digital asset. The digital asset owned by the user gets the complete authority of the asset, and it can be put on the exchange platform for sale.

The metaverse is like the virtual world and has the same value as the land or the house. If someone is holding the land in the real world, the sense of superiority is higher as they possess more money, same with the virtual world; the logic apologies the same. The digital asset owner of the owner holds the same feeling.

Features of Play To Earn & Play To Own

Smart contract delivers things better and helps to assess the rewards of the winner in role-playing games on the blockchain marketplace like gambling games.

Controlling the game on the centralized server is difficult for the platform. The smart contract also helps create a better bond between the users and the gaming company, which is immutable.

The smart contract is making the contract system more reliable and almost impossible to hack.

Online gaming on Web 2.0 is not as safe to make an investment on the platform as on Web 2.0. There is a huge chance of fraud and hacking by hackers, but the blockchain marketplace is the perfect solution for preventing fraud on web 2.0.

The blockchain is the decentralized marketplace where each data gets stored with maximum security, and it is impossible to hack. Play-to-earn games on the blockchain marketplace make it the ultimate solution.

On the play-to-earn games, the user can start playing the game by just making a small transaction on the platform within no time.

The transaction speed and the cost of transactions on the play-to-earn games are minimum.

The user can add the subscriber to the platform and can generate revenue from the platform.

There is no compulsory cost of transaction on the play-to-earn gaming platform. Even the smallest unit of money can work for investing in the game and generating revenue.

The user on the platform can exchange cryptos with digital assets. The NFT is worth of million dollars in real money. For example, the user can invest the winning amount on the NFT like The Merge, which was sold at $91.8 million.

The unique asset can be of anything, or the user can get the accessories on the platform and acquire the virtual character by the accessories. Yes, it can be called something like the most popular AAA game Pubg where the gets the digital item for the avatar.

But the difference here is that the unique item on the platform will have some value in the real world, and one will have ownership of the digital asset. The item can be exchanged on the NFT market, and one can turn it into real money.

Isn’t it interesting that just enjoying the game can generate revenue? Well, this is not just for the user on the blockchain platform but also for those who will build a play-to-earn gaming platform.

At RisingMax Inc., you will get the best move-to-earn game developers with years of experience. Building blockchain-based games are our cup of tea, and our clients love the tea we make.

The play-to-own games are robust in the marketplace, and the least of the companies are available in the competition. Building the play-to-own platform at this stage will be a win-win situation for you.

The lesser the competition the better the chance to attract users. The market experts are expecting great success from the Play-To-Own game platforms.

Here are some of the features of the P2O platform:

The play-to-own is rising up at the lighting speed because it provides the complete authority of digital assets on the gaming platform, unlike traditional games.

When someone gets the land, house, shop, or any sort of asset, then it gives a true sense of ownership. And above all, the user can put the asset on sale whenever they want to put it on.

In the play-to-own game to get possession of rare digital items, one has to complete the task. Something similar to the current AAA games, one has to achieve the task to get the rare assets.

It means if someone also completes the same task, they will receive the same asset as you. But in the play-to-own games, the digital asset will be unique and rare too.

Some Of The Popular Play-To-Own Games

There is no doubt that the games based on the crypto rewards are high in demand, and they will gain more users in the coming future.

On the other side, play-to-own games are rising up in the marketplace, and if we consider expert views, then in the upcoming days, they are going to be the best competitors against the play-to-earn games.

We have industry expert developers who have worked on the blockchain for the last 6-7 years and delivered multiple projects within no time.